Got some finishing coats of paint on her.

The Red is Epivanes Foul-away 750ml (1.3 pints).  It took the whole tin (can) to paint this area, it's very thick and they recommend that you don't use thinners with it.

The Blue is Epivanes Monourethane (3129)  750ml. It took a quarter of one tin (can) to paint both sides - spreads nicely. 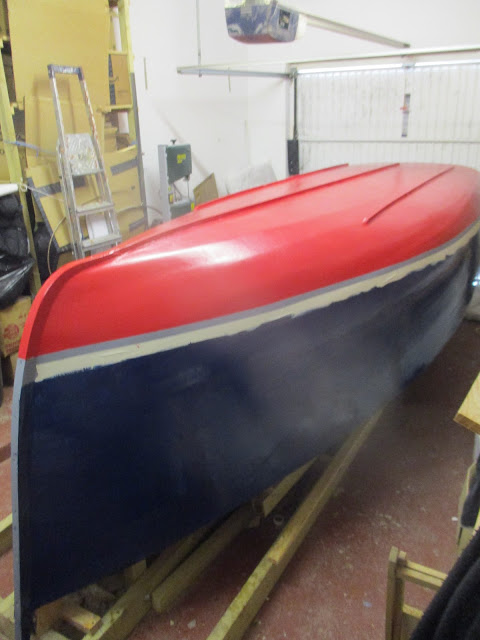 Before applying the paint I thoroughly cleaned the hull with Tack (Tak) rags, and then degreased the hull with a little thinners. Next the floor was washed to get rid of the dust.

Epifanes Mono-urethane (one-component)
A hard, one-component, air-drying, high gloss finish paint based on urethanealkyd resins. Provides superior covering and filling, long lasting weather durability and high gloss retention. For use on wood, steel, aluminium and fibreglass, for interior and exterior applications above the waterline in combination with the appropriate primers or directly on well degreased and sanded fibreglass. Also for use as a maintenance coat on intact well degreased and sanded one- and two-component paint systems. Do not apply directly on epoxy systems. Suitable for fresh and salt water. Thinner: Brush application - Epifanes Brushtinner for Paint & Varnish Spray application - Epifanes Spraythinner for Paint and Varnish Recoatable: After 24 hours at 18°C. (65°F.) Coverage: One litre is sufficient for 15 sq. metres ( 160 sq. feet) Package: 750 ml. Colours: 17 colours according to Epifanes colour card

Epifanes Foul-Away (selfpolishing  underwaterpaint)
A copper, tin and boicide-free selfpolishing underwaterpaint. Due to the selfpolishing characteristics of this paint, the bottom will remain smooth, clean and will prevent unnecessary build-up of paint coats. This bottom paint can be applied over well degreased and roughly sanded existing hard antifouling, selfpolishing antifouling or vinyl based antifouling. Suited for use on wood, fibreglass steel, aluminium and for application on a not fully cured epoxy resin (surface still shows sticky) or on Epifanes Interimcoat. Application of three coats (225 microns dry filmthickness) is advised for long-term effectiveness. Allow 18 hours to cure before launching. Thinner: Preferably unthinned. Do not thin. If necessary thin with Epifanes Thinner D-100. Recoatable: After 6 hours at 18°C (65°F.) Coverage: 750ml. is sufficient for 8m2 Package: 750ml. Colours: white, black, blue, red, redbrown and green
Posted by Gatepost productions at 01:32 1 comment:


I've now put a coat of epoxy primer on the below the waterline area. I found that a mixed can of paint  + reactor  = 750 ml. which was barely enough to cover the underwater area.

Here is what it says in the Epifanes manual:


Epifanes Epoxy Primer (two-component) An anti-corrosive primer based on an epoxy resin and zinc phosphate as the anti-rust agent. High build, high filling capacity and easy sanding. For use as a filling primer in a two-component poly-urethane paint 51

PRODUCT DESCRIPTIONS system on (ply-)wood and fibreglass and as an anti-rust primer in a two-component poly-urethane paint system on steel and aluminium.
For interior and exterior use above and below the waterline.

Cutting in the Waterline.

My build-plans make no reference to the waterline, the only mention is the draught (draft) which is 8 inches or 200 mm. Yet I need to know exactly where the waterline is, as the underwater section is red, and blue above. I can't guess where it lies because the odds are that I'd get it wrong and end up with the paint-finish looking 'skew-wiff'!!

On Youtube I watched them carry a boat out and put it in the water, then go around with a marker and mark in the waterline. No way I can do that.

I then watched how the professionals did it and larger vessels. They used very expensive laser equipment, which I can't afford...
.... or can I?
I got one from Screwfix it was made by Bosch and cost £50 ($65).

From the centre of the bottom of the transom I measured down 8 inches and marked a point. Next a spirit level was used to draw a horizontal line across the transom: the only flat surface on the boat, the rest is complex curves.

The laser leveller was now set up. 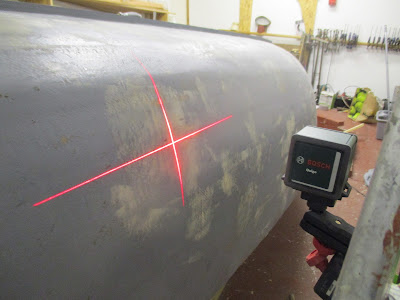 The machine self-levels and in normal conditions - setting it up 5 - 10 yards (metres) away - would project the horizontal line the whole length of the boat. As it is, I only have one yard each side which, as you can see above, gives me a short line.

I then repeated the process on the other side, starting at the transom. My check would come if I ended up at the stem exactly in line with the previous line. They met within a 'gnat's whisker'.

Starting aft, I place a continuous strip of masking-tape along all the felt-tip marks. 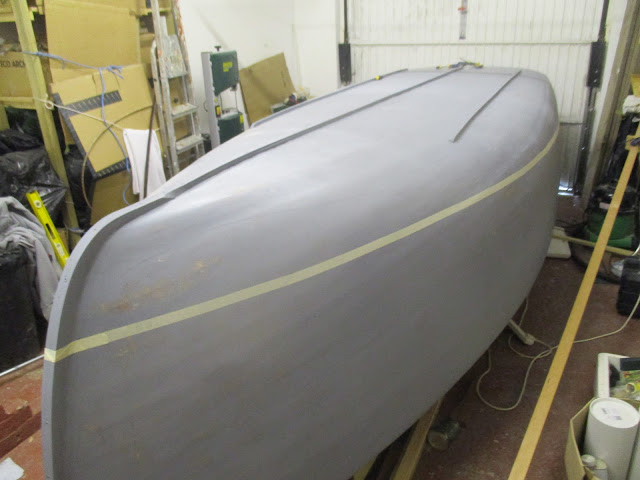 I'd got myself a waterline! It is not where I would have guessed it would end up

Today I put on one coat of Epifanes Multi Marine Primer which took exactly 750 ml (1.3 pints). 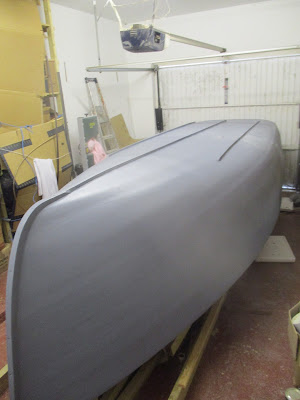 This is reputed to be a good filler as well as a grounding for further coats of paint. I shall give it a good sanding down and re-coat in a few days. 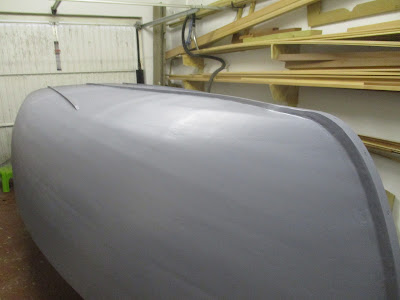 Posted by Gatepost productions at 09:45 No comments: