I can't really claim that I have a boat yet, but certainly turning her over and removing the last few moulds (molds) has produced a hull, which I boarded for the first time. 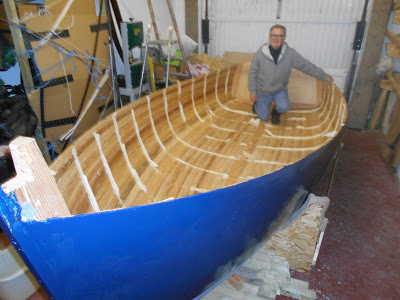 The white strips you can see are the masking-tape I used to stop the moulds from getting glued to the planking. The next task is to sand -paper the hull internally, so as to remove all vestiges of glue.

An interesting view taken from inside the hull, giving a view never possible to see when she was being built upside-down. 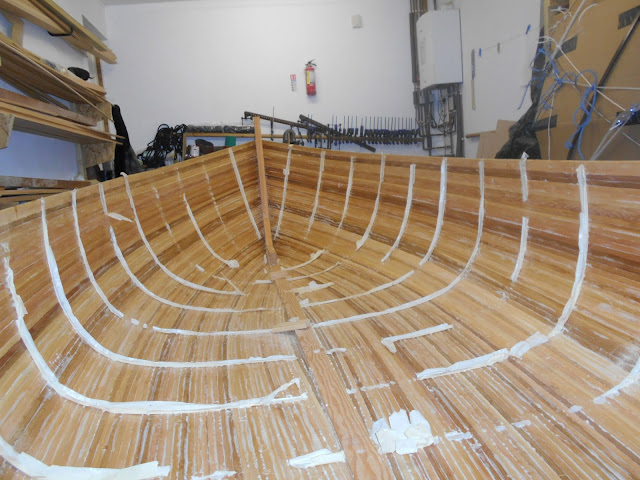 You can see all the glue that has to be removed running (white) between each plank. Important Lesson to learn: wipe off as much surplus glue as you can whilst it's still wet - given that it is almost impossible at times when the hull is upside-down and full of moulds.
Posted by Gatepost productions at 04:14 7 comments:

I began by taking out the forward support, which left the stem clear of the workshop floor which meant that the weight of the boat was now hanging from the front pulley system, and and the temporary uprights along the boat.

Next I removed all temporary uprights, except the two at the transom.
With a large gulp, I took away both of the remaining supports. The boat was now hanging from both pulley systems and the two back ropes at the transom.

The theory was working. I placed pillows along the workshop floor in case the boat scraped along it - you can see them on the above picture. 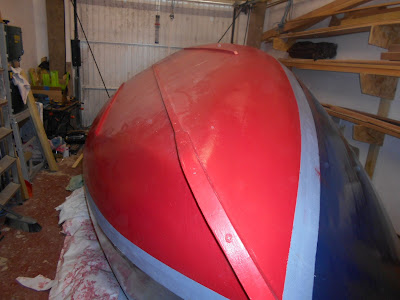 The boat was raised a few inches by using both pulley systems. I then slackened the black rope on the left and the boat turned a bit more.
This process was repeated until the boat hung vertically

Leaving the boat hanging from the pulleys I moved the black ropes over: that is to say I left them tied to the transom but moved the top end of the left rope across to the right hand scaffold, and vice-versa with the left. Exactly to the theory.

You can see the reason for this swap in the picture below (taken before I swap ropes) and comparing it to the following picture (taken after I swap the ropes). The top rope was was taken down from the right hand scaffold and slung across the left hand scaffold,

In the above picture you can see why I changed the black ropes over: now instead of crossing each other they can help to lower the boat.

At this stage I assembled the cradle I had made (see few postings ago) earlier.

Using the pulleys and black ropes allowed the boat to be dropped snugly into the assembled cradle in the exactly right position as the spirit level confirms. 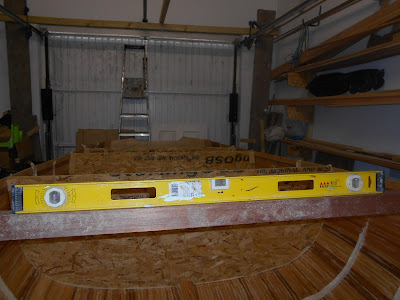 I am therefore pleased to report that my theory for turning the boat single-handed, within its own length and width, was achieved in a  way that was exactly as visualised.
QED (Quod Erat Demonstrandum)
Not bad for an 80 year old!

Posted by Gatepost productions at 09:00 10 comments:

People are concerned that, at 80, I shouldn't turn this boat over on my own, whereas I see it as a fun challenge. In theory (!!!) I see no problems with the system I have devised. It all revolves - pun intended - around two pulley systems:

The hardest part by far is already done, first I removed the moulds (molds) upon which the planking was formed:

This was a tough job which involved squirming around under the boat and squeezing up between the moulds (not for those with claustrophobia). Each of these moulds had to be carried 200 yards (183 m) to the shed I built just to store the boat materials. 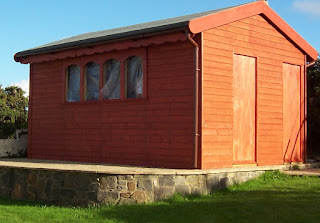 That's 26 journeys carrying very heavy and awkward moulds. Then I had to remove the building jig itself (to which the moulds had been attached)

With all the moulds and most of the Building Jig removed, there is very little holding the boat up and not toppling. To stop it falling over I have clamped some temporary uprights in place.

In addition I have packed under the boat, forward, to stop stem damage, below: 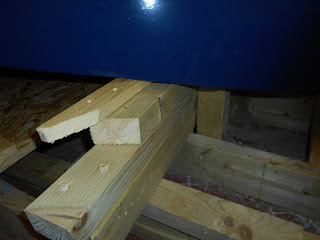 I then had a grand cleanup as there places that couldn't be reached whilst the building jig was in place.

It's just about ready to start the actual turning operation now, but that won't happen for a few days yet: other commitments
Posted by Gatepost productions at 08:21 4 comments: