I was a bit worried about using Epoxy Resin for the first time, I don't have a good record with 'sticky-stuff'. So I did my usual thing and did a lot of research in preparation.

I came to the conclusion that I would use the West System for two reasons:

1. Robbins Timber my timber supplier sold it at very competitive prices.
2. If I stuck to one range of products, rather than mix 'n match, then I shouldn't have compatibility problems.

I soon learnt that you have to mix exact quantities of materials together. I therefore spent money (wisely I discover) on the means of measuring and bought dispensers that insert into tins. 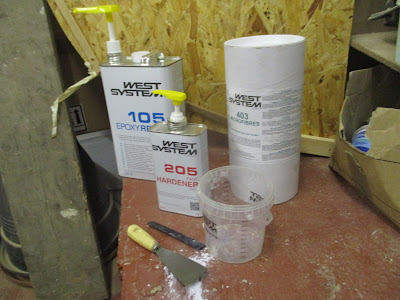 I hold the plastic mixing bowl under the dispenser in tin 105 and push it all the way down: this delivers exactly 5 portions of epoxy resin.

I then place the bowl under the dispenser in tin 205 push it all the way down: this deliver exactly 1 portion of hardener.

Using the black plastic paddle I mixed the 5:1 ratio mixture for two minutes.

Next I use the scoop from inside the cylinder-box 403 to add one level scoop of the white powder Microfibres to the mixture in the bowl. I stirred until it took the texture of peanut butter.

This gave a mixture of Filler with which to fill gaps, screw holes etc by the use of the scraper. 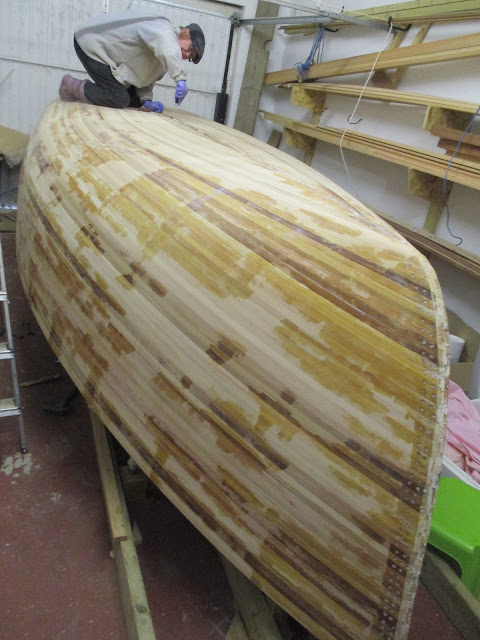 You get some idea of the size of the boat here. 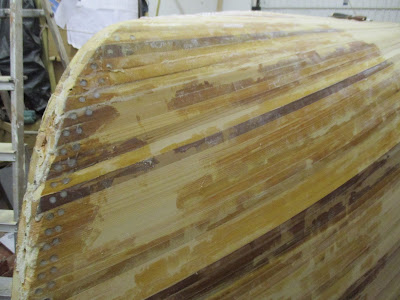 Posted by Gatepost productions at 07:42 No comments:

So I took two days out to learn about handling powerboats!!

We stayed at Beggars Reach Hotel, which was very quiet and restful for Pat... 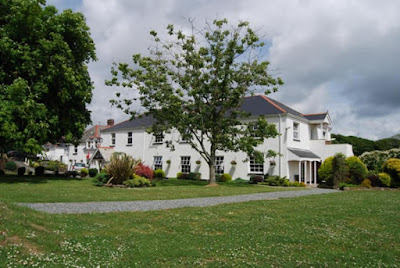 ... whilst I had two rewarding days at Neyland Yacht Haven... 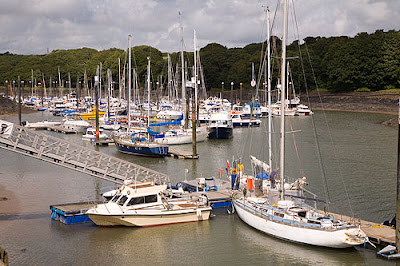 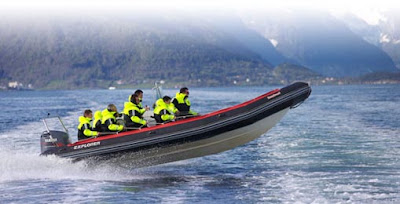 I had imagined chugging about in something a bit smaller and a lot slower. Although I realised this was an official course of the Royal Yacht Association, I hadn't realised how intensive it was and that there would be an examination at the end of it.

I think they were all surprised that a little old '78 year old' should turn up for such a course ... but not as surprised as I was when we skimmed along the water at 50 miles per hour doing high speed manoeuvres. I soon warmed too it though and had great fun.

We spent some time in the class room learning about weather, charts, navigation and lots of other nautical things which included knot tying.

Then we began the slow stuff, which included how to leave and come up to the jetty. How to anchor and how to tie up to a buoy.  We learnt how to use the depth-finders and GPS system.

One big test was the 'Man-Overboard' routine. We had a small buoy which was thrown overboard and which we had to rescue in one minute .... or fail! To make it more complicated the buoy was thrown overboard, from behind our back, at a moment's notice to the cry of 'Man Overboard'. To make it more complicated, we were travelling at 45 mph at the time. Without slowing I had to turn the boat in the tightest circle I dared and come up alongside the 'victim' very, very slowly. I was relieved to do it in 40 seconds.

We had lots of other tests and luckily we all got through them! 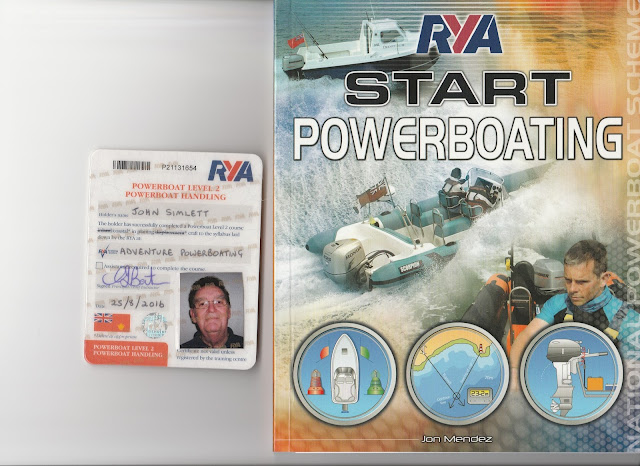 I'm now qualified to handle a powerboat ... although mine will travel at a more sedate max of 20 mph.

I'm so glad I did the course as I now feel in control of where this project goes next!

The RYA is the authority for British Coastal waters and Inland Waterways and the certificate I earned  will give me access to so many things, from insurance to berths, which I would not have available to me before.
Posted by Gatepost productions at 09:12 6 comments:

As the boat is starting to look like a boat, and launch day becomes a real event rather than a vague dream..

.....Pat thought I should learn how to 'sail' one and so she's signed me up for a course with the Royal Yacht Association for two days of power-boat training.

Lots of interesting places along this coast line to take a boat into for a quiet picnic. Here's a touch of the local area: 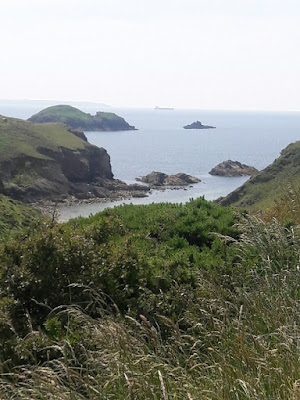 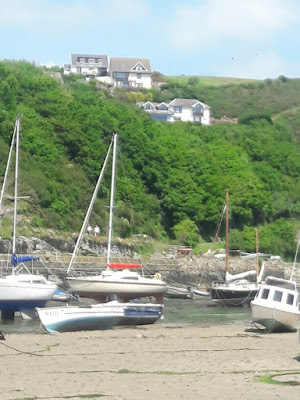 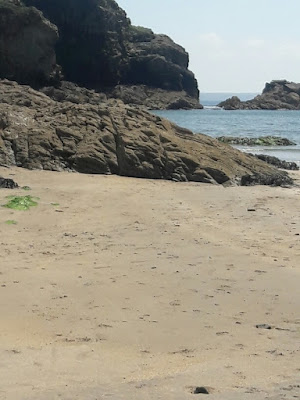 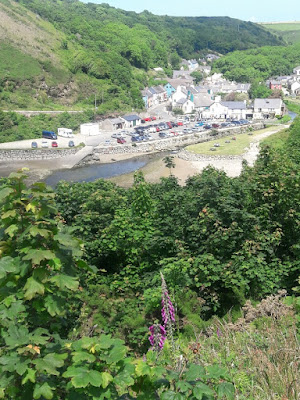 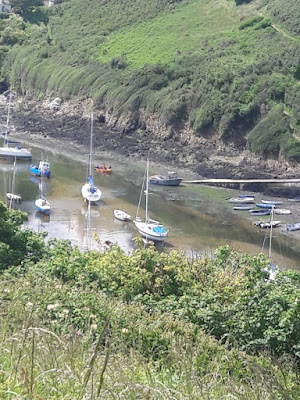 Posted by Gatepost productions at 07:40 No comments:

It occurs to me that after I finish sanding down the boat, I'll be about to enter a totally new world with its associated problems.

The first area will be, covering the boat with glass cloth and then epoxy coating it. All I can do, and have done, is watch Videos on the subject on line.

The second problem is turning the boat over to the right way up, because, as you know, it's been built upside down until now. Everyone is asking me how I, at 78, will turn the boat over singlehandedly? I give them a knowing wink, but in reality I don't how I will do it ... but I'm confident that I will and look forward to the challenge. As Archimedes said, Give me a lever and I'll Move the World.

The final problem is a little harder to define, so I will take you back to earlier in the build to help me explain.

1.
I build the hardback and fixed the moulds to it. 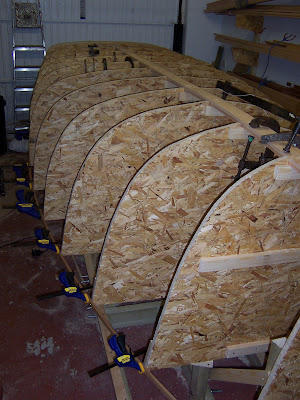 2.
I cut each Mould in half and then put it back together using butt-straps: the idea being that it would be easier to remove in halves. 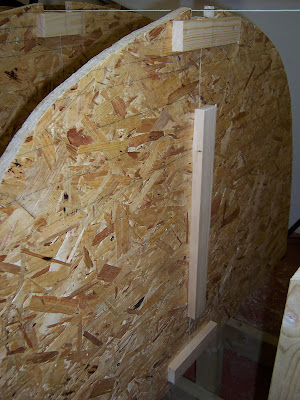 3.
I then put masking tape around the edges to prevent the planks from being accidentally being glued to them. 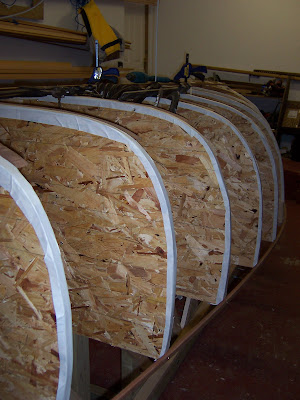 Which brings me to the third problem. Over the period of planking I had this reoccurring worry that maybe the masking tape wouldn't do the trick and the planks would be stuck to the moulds. After all, most sources say use plastic sheeting.

The news is good, for today I decided to remove the Moulds from Stations 9 and 4 ... just to stop me worrying. As you can imagine, it's quite a struggle to get under the boat, as you can see below: 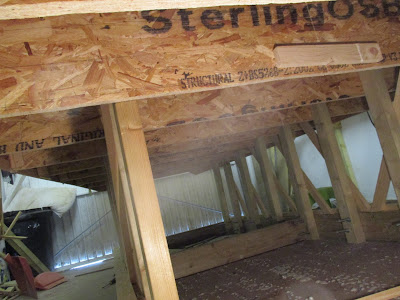 I began by unscrewing the buttstraps and then unbolting the uprights and side bracing. Sure enough the mould broke into the two halves and after a slight wiggle they came away, leaving the masking tape hanging from the planks.. 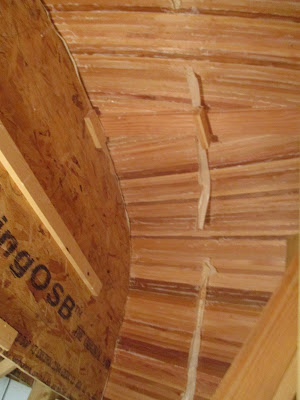 Here, below, are the two halves of the mould from Station 9 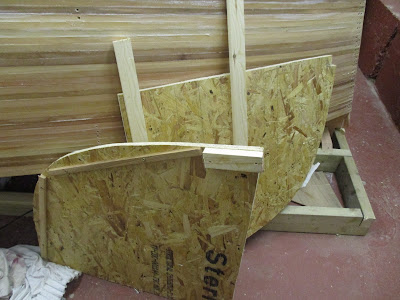 Posted by Gatepost productions at 09:01 4 comments: