Life keeps getting in the way of the boat-build; I won't bore you with the details. Having said that, there isn't a lot to say about sanding, but I'll try.

The tip to be emphasised is 'Wipe off the surplus glue, from both outside and inside, whilst you are gluing. Don't leave it to set hard or you will suffer from the sanding problem I have now." 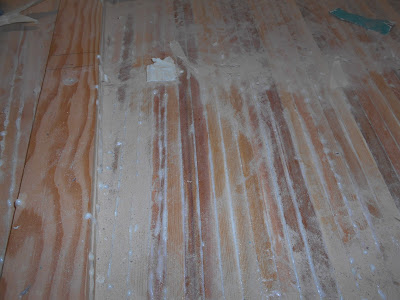 I was warned, but the significance of it was either not fully understood or/and not emphasised enough.

What seems such an apparently easy job - wipe off glue with wet cloth - isn't as easy as all that, for three reasons:

1. The inside of the boat, shown in the picture above, is hidden when you're gluing because the boat is upside down at the time and it's difficult to see, or get at, the surplus glue.

2. Even when you wipe all the glue off the problem isn't solved,  because one attribute of the type of glue used is that it expands to fill gaps.
This expansion continues for up to an hour and leads to the surplus glue continuously expanding out of the seam, and you have to wipe it off after every expansion.

3. Where the masking tape was used to stop the moulds (molds) sticking to the planking, there is a considerable build up of glue. The worst of this I remove with a chisel, but there is a risk of damaging the planks with this method if you're too heavy handed. I'm not!

So I've been sanding for days and days and got about a half of the boat completed. 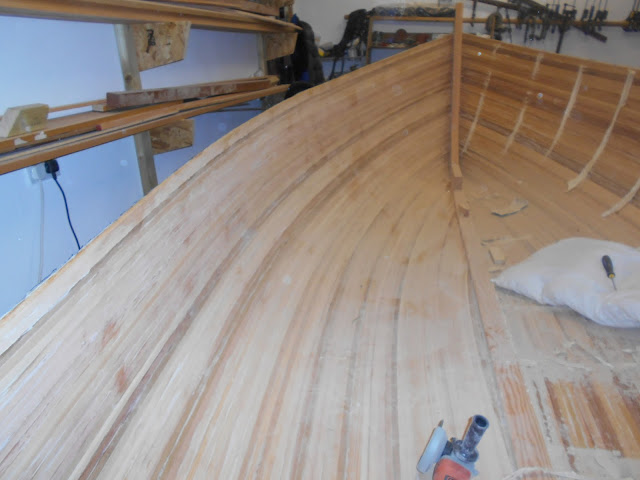 I'm mostly using the round orbital sander, supplemented  with my rectangular one.

The rectangular one is of limited use with the concave curve of the inside planking, whilst the round one soon gets through the paper backed sanding discs. The wear on the disks is chiefly at the edges. 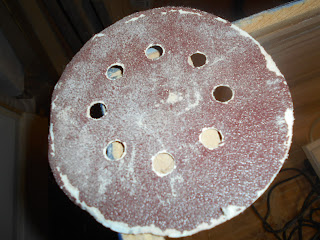 I looked around for alternative discs and came up with there metal mesh ones that have tiny hooks all over its surface. 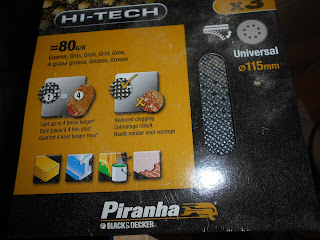 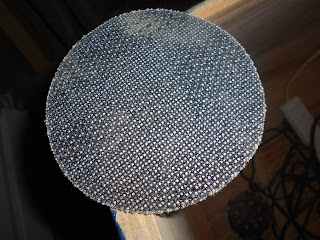 They seem marginally better, but I've only just started to use them, so I will update you their performance at a later date.

Posted by Gatepost productions at 07:41 5 comments: