THE SECRET WEAPON That Put The Icing (Frosting) On The Cake

When one uses epoxy as a glue or as a filler, one has to deliver it to the area in which it is to used as efficiently as possible. I've tried trying to get it in place with a palette knife, pieces of wood and with a scraper. Although these ways work, it is very inefficient and......sticky.... and I have a bad reputation with sticky things!

For the uninformed, this is a conical bag into which bulk icing  is placed. The tip of the bag is then snipped off to the required size. The bag is then squeezed and the icing emerges, very much like toothpaste out of a tube, and piped around the cake.

The problem I found was that when I put the glue in the bag, half of it got wasted sticking to the length of the inside of the bag: I only needed the bottom quarter of the bag, as epoxy goes-off very quickly so you can only work in small quantities.

My own invention was to put the bag in a tin (can) thus: 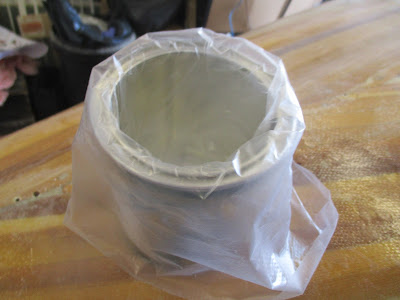 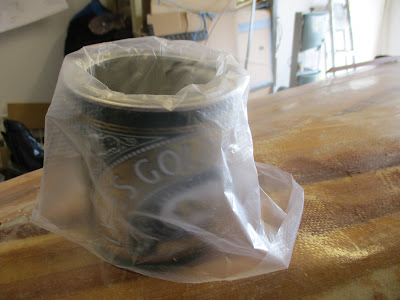 I mixed my epoxy glue in a yogurt carton and then scooped it into the bag: 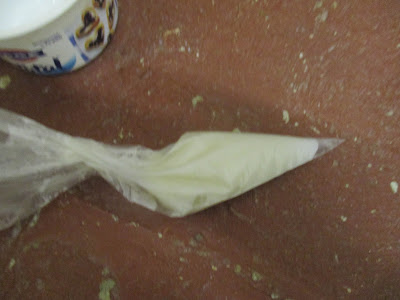 Next I piped the glue beneath the bilge runner, which was loosely held in place by screws: 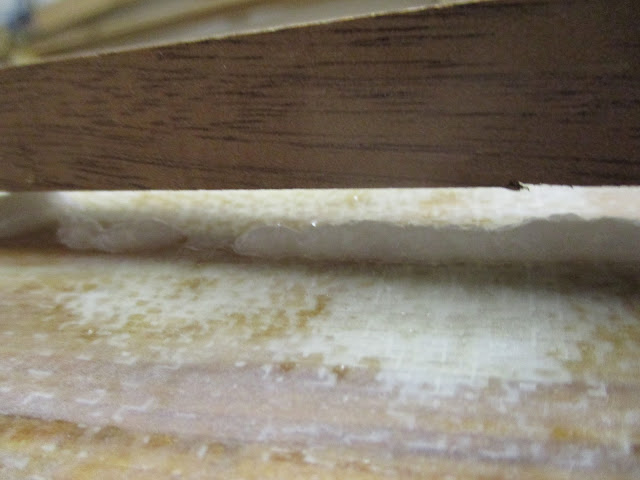 Finally, I screwed the runner into place, not too tightly but just enough for the epoxy to squeeze out a little (the epoxy's adhesive quality  secures the joint and not the pressure from tight screws, unlike many glues).

I then ran my gloved finger along the edges forming the squeezed out glue into a fillet. 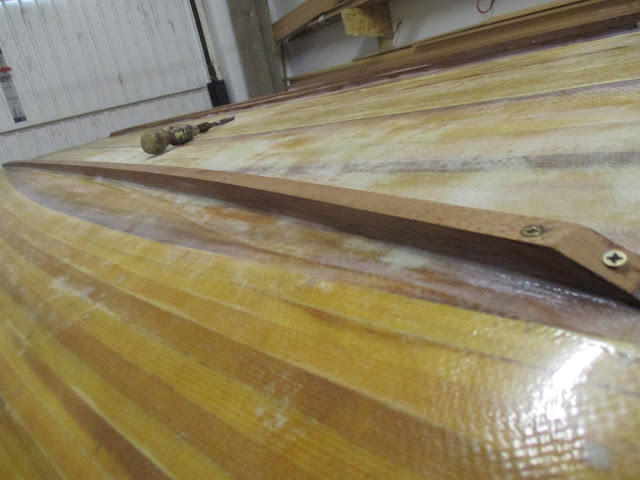 Posted by Gatepost productions at 07:30 No comments:

Trying to laminate the five pieces of hardwood that go to make up the outer stem was complicated and took a long time. As I mentioned earlier, trying to steam-bend the pieces during the winter let to them splitting.

I finally finished the stem yesterday. Each piece had to be glued in situ, and then held in place by panel pins and, where the bend was tightest, screwed. When the glue had set I removed the pins & screws before repeating the process for the next piece.

Where the stem met the planking an irregular bead of white glue was painfully obvious to the eye. Similarly, the joints between the laminates could clearly be seen. 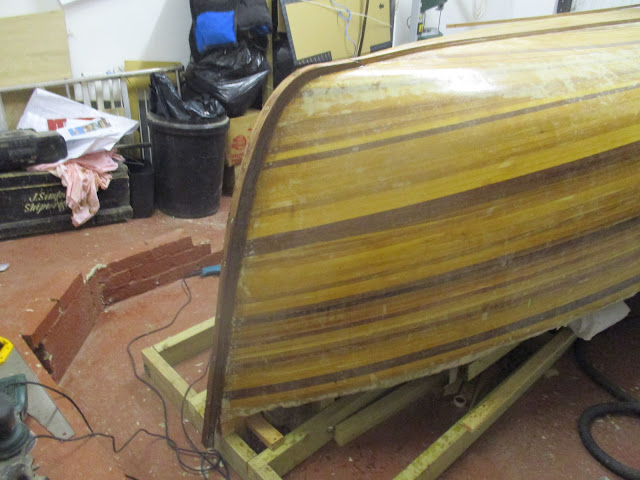 I've fitted the runners along the bottom, with screws, although they still have to be glued in place. 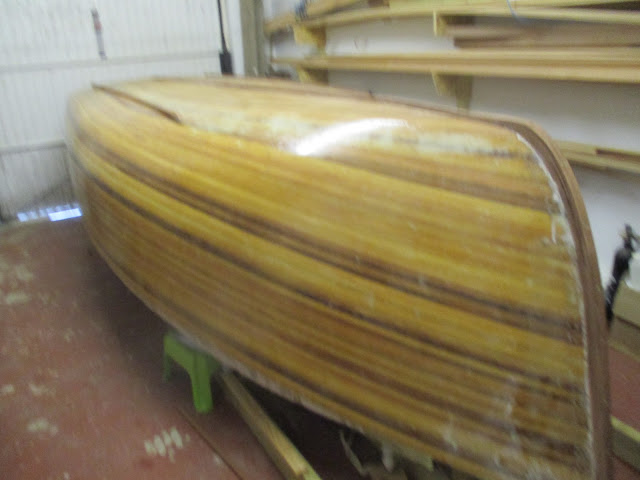 Posted by Gatepost productions at 07:29 No comments:

Sometimes I have to remind myself that one day this boat will get finished and look something like this: 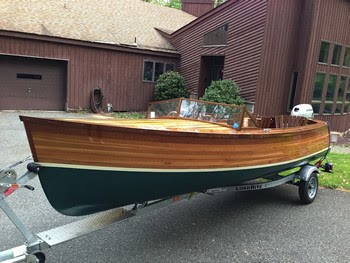 In the meantime, I need to prepare the hull for painting.

The outer shell of the glassfibre/ epoxy has a layer of gelcoat. This will need to cleansed using a degreasing fluid.

Every video I see involves the use of a 'random orbital sander'. I take particular notice of :

This is a really wonderful (US) site and worth subscribing to: full of advice and practical videos on small boats. So I bought a sander & sanding disks on their say-so. 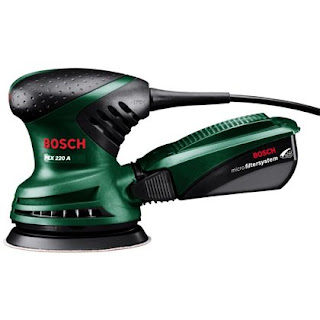 Quantity of Paint Required (Areas to be Painted)

It's no good guessing at the quantity of paint, firstly, one needs to know the areas to be covered - I used this formula from the suppliers of my boat plans

There are two areas I'm interested in are,
(a) below the waterline (the Load Water Line, LWL) which is the green area in the top photo.

(b) above the waterline: from the top of the green area to the gunwale. Here the Length used with be the Length Over All  (LOA) ... not forgetting there are two sides! Where 'B' is the Beam (width at fattest part!)

I got so much information on different types of paints I didn't know where to turn next ..... this video got me pointed in the right direction

The next problem was locating the paint. typically, if they had the paint they didn't have the colour (color), or in the right quantity. Then, by pure chance whilst browsing deck fittings on the site from whom I bought most of the materials for Seagull, I found they do the paint... further, if they didn't have it they would get it in 4 days.

Using the areas I calculated and using the area a pot of paint covered in square metres (sorry US friends, I prefer square footage too) I was able to come up with this list, plus all the extras:


Here's the quote in British Pounds (US multiply by 1.3) 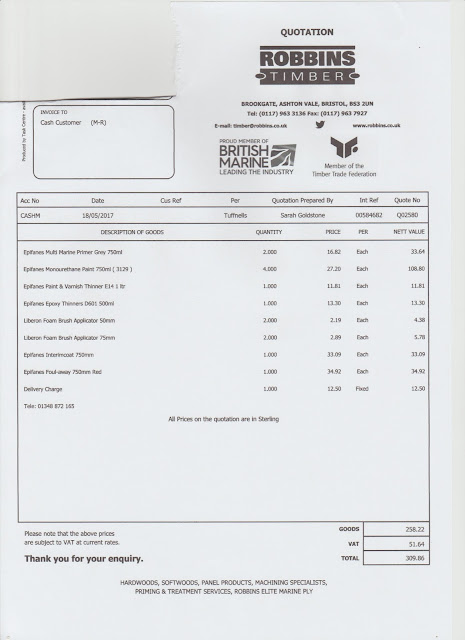 UPDATE ON BUILD
To finish steam-bending the outer stem I adapted my drain pipe - which bent under the steam, by taping it to some stout timber ....it worked out (below) 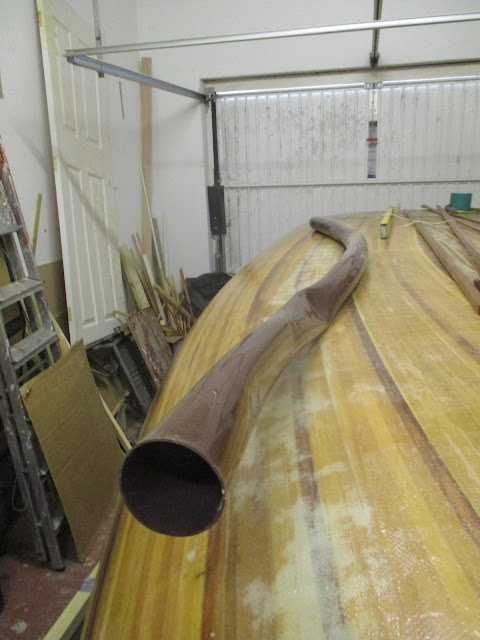 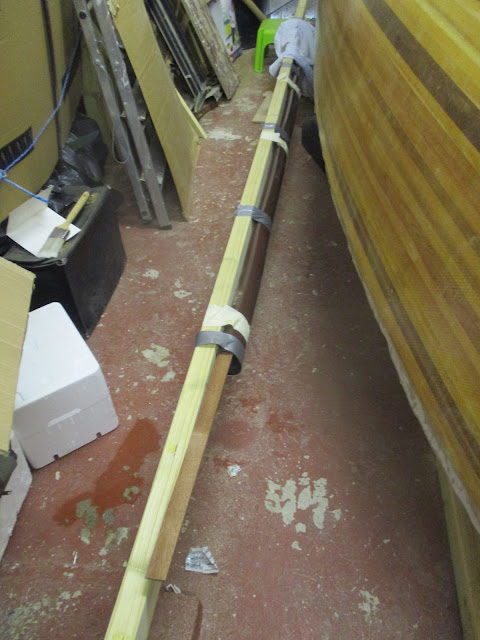 Posted by Gatepost productions at 04:18 No comments: